Rikka is the form most associated with the Ikenobo School. 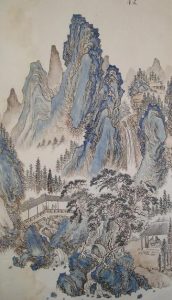 Though ancient in its origins, it was formally defined by two brilliant headmasters, first Senko Ikenobo in 1462 and followed a century later by Senno Ikenobo.  Rikka is always upright with a noticeable neckline and the classical form, rikka shofutai, has strict rules that govern the choice and placement of seven to nine main elements derived from Chineselandscape scrolls.  Those elements are a river, mountains, clouds, a village, a path and a waterfall.

In 1999, our current Headmaster, Senei Ikenobo, developed a modern form of rikka that maintains it upright structure and neckline but frees the form from the strict rules that determine classical rikka.  The essence of Rikka Shofutai is change and what determines its structure today is not expected to be so in the future.

One of the earliest forms of rikka is ubudate, a form that developed before the more structured efforts to follow.  It is composed primarily of materials that are used in their natural form and not subjected to the technical wiring, bending, and shaping techniques used in later classical forms. 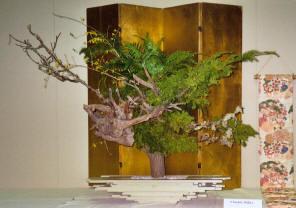