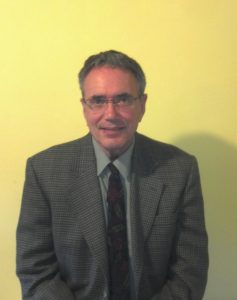 At the University of Tennessee, Professor Harris' studies in the philosophy of existentialism and phenomenology generated an abiding interest in Japanese culture.  After moving to Chicago,  he was given a gift certificate for six ikebana classes in the Ikenobo School of Floral Art with the renowned Senior Professor Ikka Nakashima, an event that began his flower life.  His interest in aesthetics and the guidance of Professor Nakashima  established the path of flowers as a guiding principle in his life.

Since that chance beginning, Professor Harris has assisted with and organized more than fifteen major Midwestern ikebana exhibitions at the Chicago Botanic Garden, exhibited at Anderson Gardens in Rockford and conducted flower demonstrations at Columbia College, the University of Iowa, the Art Institute of Chicago, Northeastern University and Loyola University.  At the request of Professor Nakashima in 2010, he assumed leadership of the Chicago Chapter of the Ikenobo Ikebana Society.  In that same year, Professor Harris initiated a new annual flower exhibition at the Garfield Park Conservatory in Chicago to bring the ikebana art form to those not frequently served by the city’s arts organizations.  Upon the death of Professor Nakashima in 2014, her collection of tea and ikebana implements, kimonos, obis and other cultural items were donated to the Chicago Japanese Culture Center.  Professor Harris serves as Curator of this extensive collection.  The future of ikebana and the Ikenobo School is strong with a new generation of leadership embodied by Headmaster Designate Senko IV.  Senior Professor Harris is committed to guiding the Chicago Chapter by maintaining the classical standards of his predecessor while introducing the modern Ikenobo curriculum and forms to a new generation.